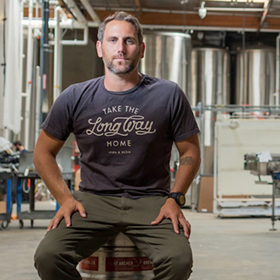 I liked this article for a number of reasons. First, I used to live in SoCal and when I worked with Oakley we were really active in the skate and surf communities. I miss that! The co-founders/-funders of Saint Archer were deep into action sports, which not only influenced the beer and guest experience but their approach towards growing the brand. They were obviously so well-connected, both inside and outside sports, but admitted knowing very little about craft beer in the very beginning. They knew however that it was too good an opportunity to pass up, so they dove in and made it happen. What followed was a roller coaster of rapid growth, which one of the co-founders Josh Landan admits was definitely a break in their favor.

When it got to the point when they needed an additional $10M to keep up with growth, they made the call to look for outside buyers. They had Anheuser-Busch InBev initially show some interest but ended up going with MillerCoors. After joining the MillerCoors distribution network Saint Archer lost a number of key customers and what followed was a standardization or acclimation into the established beer machine. This didn’t feel right for Landan who eventually left to form a company called Villager Goods that sells non-alcoholic beverages.

Just a good read and a reminder that the same scenario could/will apply to a number of the over 6,650 open craft breweries in the United States at some point in their operating lives. Most brewers, as well as small business owners in any industry, grow their business to a point where they’re faced with maintaining, growing or selling (I’m completely oversimplifying there). Hopefully for craft brewers there is enough room and revenue for most to stay in business (if their beer is any good, which Saint Archer’s is) for as long as they choose to do so independently. We’ll see how it plays out in the next decade.